Last year’s Consolidated Appropriations Act included a section called the “No Surprises Act” that provides federal protections against surprise billing by limiting a healthcare plan enrollee’s out-of-pocket costs – and prohibiting balance billing of the enrollee by out-of-network providers – under typical circumstances in which surprise bills arise most frequently. Surprise billing occurs when an individual receives an unexpected balance bill from, typically, an OON provider where the individual doesn’t know the provider is an OON provider with respect to the individual’s coverage.

Lockton comment: A “balance bill” is an invoice to the plan enrollee for the remaining balance of charges assessed by the OON provider after the healthcare plan has paid its portion (if any) of those charges. Because the OON provider is not limited by a network contract on what it may charge, it has traditionally been allowed to levy large charges, only a small fraction of which might be paid by the plan. The provider then “balance bills” the enrollee for what the plan did not pay. These balance bills, in some cases, impose significant financial hardship on enrollees.

With regard to these services, the earlier set of rules generally limits cost sharing for OON services to in-network levels, requiring such cost sharing to count toward any in-network deductible and out-of-pocket maximums, and prohibits the provider from “balance billing.”

Overview of Part II of the new surprise billing rules

Regulators again confirmed that the surprise billing rules apply to grandfathered and non-grandfathered healthcare plans, but do not apply to account-based plans (like health reimbursement arrangements, or HRAs), “excepted benefits,” such as typical flexible spending accounts, dental, vision and appropriately structured fixed indemnity plans, or retiree-only plans. They apply to health insurance carriers and ERISA group health plans, whether fully insured or self-funded, governmental plans not offered by the federal government, and church plans.

The meat of the pumpkin, or rather the guts of the newly issued regulations, is a set of requirements for resolving payment disputes between plans and OON providers regarding claims arising under the No Surprises Act, i.e., emergency services, nonemergency services furnished by nonparticipating providers at participating facilities, and OON air ambulance services.

Before the IDR process may begin, there are some hoops and hurdles to jump through. First, the provider will either receive from the plan an initial payment it finds insufficient or a notice of outright denial of payment from the plan. At this point, the provider may open a negotiation period within 30 business days beginning on the date the provider receives the initial payment or notice of denial. The negotiation period may run for up to 30 business days.

Lockton comment: For fully insured plans, the insurer will first look to any All-Payor Model Agreement or specific state law for payment terms. If those don’t exist, the rate will generally be the lesser of the billed charge and something called the “qualifying payment amount,” or QPA. (See our alert (opens a new window) on Part I of the surprise billing rules for more details.) Where that fails to satisfy the OON provider, the provider can be expected to open negotiations. For self-funded ERISA plans, which are not subject to state law and that have not opted-in to a state surprise billing law (where an opt in is permitted), the negotiation process can start sooner.

If negotiations fail and the parties cannot agree on a payment amount, the parties must let the 30-business-day period expire before initiating the new IDR process. That process will be initiated through a federal IDR portal. This process must be initiated within four business days after the open negotiation period is exhausted. The parties may jointly select a third party certified IDR entity (an arbiter) within three business days following the IDR initiation, or if not selected, federal authorities will do so. The plan and the OON provider will then submit their best settlement offer, along with documents supporting their position.

Lockton comment: In conjunction with issuing these new rules, federal regulators will launch a website focusing primarily on providing general information about the No Surprises Act provisions. Additional information will be posted over the next several months, including how to initiate an IDR process in the federal portal.

The arbiter will then decide whether the plan’s or the OON provider’s offer is the most suitable and issue a binding determination of the OON payment amount within 30 days. The IDR will choose the party’s offer that best represents the appropriate OON rate for the items or services. The presumption is that the qualifying payment amount (the “QPA” equal to the plan’s median contract rate, as we discussed in our earlier alert) is the appropriate OON rate, but this can be rebutted by the provider through the submission of additional, specified information that clearly demonstrates that the value of its services is materially different from the QPA.

Lockton comment: The arbiter may not consider usual and customary charges, the amount that would have been billed without the protections, or any public payor payment or reimbursement rate (e.g., under Medicare, Medicaid, CHIP, TRICARE, etc.).

Both parties are required to pay a $50 administrative fee (for 2022), and the losing party is responsible for paying the cost of the arbitration process. For 2022, the range is set at $200 to $500 for a single determination, and $268 to $670 for batched determinations.

Lockton comment: “Batched items and services” means multiple disputes between the same plan and OON provider that are considered jointly as part of one payment determined by the arbiter. The idea behind “batching” determinations is to streamline decision-making and create cost efficiencies. However, there are detailed rules regarding what items or services may be batched, and timing requirements too. For example, the items and services (which must be the same or similar) must be billed by the same provider or group of providers (i.e., same National Provider Identifier or TIN), and the payment would be made by the same group health plan or insurer.

Lockton comment: The Affordable Care Act required non-grandfathered plans to provide an independent external review of certain healthcare claims, when requested by a claimant after a plan’s complete or partial denial of a claim. The new regulations, as noted above, will require even grandfathered plans to provide external review of surprise billing-related claim adjudications, if challenged by an enrollee or an authorized representative.

Lockton comment: Employers with insured plans have the option to contract with the insurance carrier to report the information. If the insurer agrees but fails to comply with reporting, the insurer is responsible for violating the reporting requirements. Employers with self-funded plans will need to work closely with their third-party administrator (TPA) to ensure that their reporting obligations are satisfied and should request the TPA to indemnify the plan for violations of the reporting requirements. Even with such an agreement, a self-funded group health plan is required to monitor the TPA to ensure it is submitting the required information.

The surprise billing dispute resolution portions of the recent regulatory package are “interim final rules,” meaning plans must comply but the federal agencies issuing the rules see them as merely interim; the agencies are accepting comments on the rules for several weeks, and then are sure to tweak them. Compliance is required for plan years beginning on or after 2022.

The air ambulance regulations are still in proposed form and may be used for planning purposes.

Plans, of course, must rely on their insurers and TPAs, as applicable, to implement claim processing protocols that comply with the new dispute resolution rules, with respect to identifying OON claims subject to the new rules, calculating QPAs and limiting the enrollee’s cost-sharing liability based on the QPAs, providing appropriate notice to the enrollee, making an initial payment to the OON provider (or providing notice of denial) with all information required by the rules with respect to that transaction, and dealing with demands for arbitration. Plan sponsors will want to get written assurance that the insurer and/or TPA will comply with these requirements on behalf of the plan.

These matters should be negotiated with carriers and TPAs now because the new rules apply to plan years beginning on or after Jan. 1, 2022.

Lockton comment: We note that some carriers and third-party claim payers, such as United Healthcare and UMR, have already announced how they intend to help plan sponsors satisfy many of the new transparency requirements, including the arbitration process for OON claims subject to the surprise billing rules, and what the plan sponsor can expect to pay for those services. 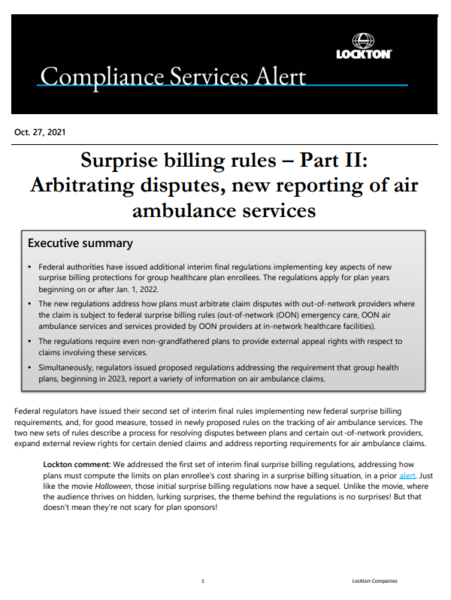 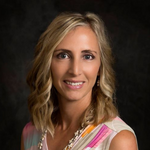