The path to a former Vice President Joe Biden presidential victory and Republicans retaining control of the Senate has become clearer as the votes continue to be counted. The results are not yet certain, and those who have counted President Donald Trump out have been mistaken before. Adding to the uncertainty is a Jan. 5, 2021 runoff election for a Georgia Senate seat that could determine the balance of power in the Senate. Despite the uncertainty, what we do know is that no combination of political power dynamics will change how necessary it is for businesses to manage their own risk and empower their people.

This alert aims to give readers a snapshot of how the electoral outcomes might create challenges and opportunities for businesses. For a more detailed analysis, please tune in to our webcast series to get more insights on the policy and political landscape as it becomes clearer.

Nov. 6 | 1 p.m. CST - 2020 election: Eye of the hurricane (opens a new window) We will discuss what we do and don't know and how the results might impact employer healthcare plan sponsors.

Nov. 12 | 2 p.m. CST - And the winner is ... The 2020 election wrap up (opens a new window)  We decipher the latest election information and take a deeper dive into the implications for businesses, retirement plan sponsors and healthcare.

Preelection talks of another COVID-19 relief package dramatically failed time and again after partisan fighting. Many pointed to political dynamics in light of the impending election as a reason a deal wasn't reached. The likelihood of a COVID-19 relief package increases with the election behind us and with lessons from exit polls highlighting the importance of the economy to voters.

The timing and contours of the package remain to be seen, but key components could include:

Democrats in the House, Trump and Biden have all advocated for a comprehensive package, but Senate Republicans have argued for something more limited.

Policymaking with small margin for victory

Early indications suggest at least two more years of split government. For example, Democrats will maintain a majority in the House even if Trump prevails, and Republicans are in position to keep the Senate even if Biden proves victorious.

Lockton comment: As of this writing, Republicans have a lead in toss-up House seats. There are still more than 40 races to be called. Republicans could theoretically retake the House, resulting in a possible red wave, but it still remains unlikely that Republicans gain the 17 seats necessary to retake the House.

The challenges of small majorities will force either bipartisan action or a stalemate, even if Democrats are able to win the presidency and at least tie in the Senate, which would allow a then-Vice President Kamala Harris to break a tie. Not only does the filibuster rule in the Senate provide the minority party power to block most legislation that cannot achieve 60 votes, but internal party dynamics will force compromises among centrists and lawmakers who are farther right or left. A Democratic sweep could spell the end of the filibuster, but that is far from certain.

Of course, the president will have administrative powers to implement some policy initiatives without needing approval from Congress. However, the extent a president can act unilaterally is constrained by laws Congress has previously passed and is subject to scrutiny by the courts and Congressional oversight committees.

In short, what we know from the election results so far makes major legislative shakeups less likely. Instead, legislative action is more likely to work around the edges, leaving it to businesses to pursue their own unique solutions.

Trump and Biden's healthcare policy has diverged significantly. Biden has pushed for an expanded healthcare safety net, including ambitious policy goals of:

Trump, on the other hand, has consistently championed less government involvement in healthcare. Instead, he has implemented policies that aim to increase choice and competition. This includes efforts to increase price transparency and roll back provisions of the ACA.

Speaking of the ACA, the future of healthcare policy could be radically altered by how the Supreme Court rules on a case it will hear next week. In that case, the Trump administration and several right-leaning states have asked the court to rule the entire ACA unconstitutional. The expansiveness of the ACA means a ruling that it is unconstitutional will force swift and extensive action on healthcare policy no matter who holds the keys to the policymaking car.

Bipartisan action is not completely off the table. Areas of agreement might include ending surprise medical billing, supporting price transparency regulations and efforts to reduce drug pricing. Policy solutions for these issues might alleviate some cost and administrative challenges for employers, but they will not be a panacea. In particular, solutions to reduce prescription drug costs focus primarily on what the government pays for drugs with only incidental benefits for private plans.

Healthcare was again a top issue for voters. We go into more detail on Trump and Biden's healthcare policy views here (opens a new window).

Retirement policy initiatives have enjoyed a significant amount of bipartisan support in Congress. Several bipartisan proposals from the current Congress will likely carry over into 2021 regardless of the balance of power. Proposals worth watching include a potential mandate for plans to implement automatic enrollment and contribution escalation, raising catch-up contributions to $10,000 for those aged 60 or older, allowing employers to match employee student loan payments with a contribution to the retirement plan, and mandating plans to allow part-time workers to join.

Trump's approach to retirement policy has focused on undoing Obama-era regulations, and that would likely continue in a second term. Ideally, Trump would implement policies to expand the tax breaks for retirement savings combine and simplify all existing tax-deferred savings accounts, such as 401(k)s and individual retirement accounts (IRAs), among others. For Biden, the ideal retirement policy initiative would include a proposal to “equalize” the tax breaks in qualified retirement plans by removing the tax-deferred aspect and replacing them with tax credits that ensure lower income workers receive the same retirement-related tax benefits as higher income earnings. Whether Trump and Biden, challenges to their more aggressive proposals are expected, and it seems unlikely either would make large-scale retirement plan overhaul an immediate priority.

Several key issues impacting businesses remain unresolved and are likely to be considered no matter the balance of power:

Lockton Government Relations will continue to monitor the shifting political dynamics and the policy implications. Register for our webcast series (above) for a more comprehensive recap of the election and sign up (opens a new window) to receive invitations to upcoming episodes of our 30-minute video series, Views from The Hill. In December, we will talk with Washington D.C. insiders about the intersection of politics and policy in light of the election outcome and the lame duck. 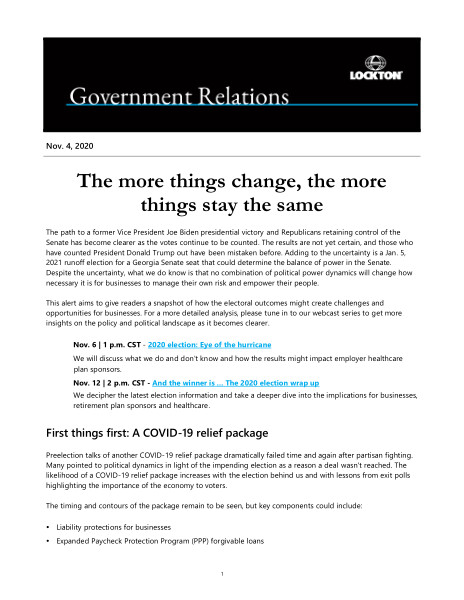 Download alert (opens a new window)Not legal advice: Nothing in this alert should be construed as legal advice. Lockton may not be considered your legal counsel, and communications with Lockton's Government Relations group are not privileged under the attorney-client privilege.