Texas Governor Greg Abbott has issued an (opens a new window) executive order (opens a new window) banning Texas employers from compelling employees and customers (at least those in Texas) to submit to a COVID-19 vaccine over the individual’s objection “for any reason of personal conscience.”  The executive order (the “order”) purports to apply to any “entity in Texas” and is effective now.

The order clashes with, and we believe is trumped by aspects of, the recent federally-imposed mandate (opens a new window) on certain federal contractors and their subcontractors. Similarly, the order appears to clash with aspects of impending federal rules (opens a new window) from the Centers for Medicare and Medicaid Services (CMS) requiring that most healthcare providers (the CMS rules) mandate the vaccine for their employees and also likely clashes with the impending Occupational Safety and Health Administration (OSHA) emergency temporary standard (ETS) by which larger employers must either mandate the vaccine for their employees or, require frequent COVID-19 testing.

But that issue – whether federal rules or the order – reign supreme in Texas will likely be presented to a federal court in the very near future. Unfortunately, then, at the moment the order imposes more uncertainty and confusion on Texas employers when it comes to mandating the COVID-19 vaccine.

More on the executive order

The order, by its express terms, provides that “no entity in Texas can compel receipt of a COVID-19 vaccine by any individual, including an employee or a consumer, who objects to such vaccination for any reason of personal conscience, based on a religious belief, or for medical reasons, including prior recovery from COVID-19.”

Violation of the order cannot result in imprisonment, but can potentially subject the employer to a $1,000 penalty. Whether that’s per violation – e.g., per Texas employee to whom an employer vaccine mandate would apply – or a single fine on account of a single mandate, is not clear.

With vaccination rates stalling and the delta variant in high gear, the Biden administration advised employers in early September that they would be an integral part of the administration’s plan to increase the vaccination rate of employees in workplaces across the country. The Biden plan involves three main initiatives:

Texas employers, then, are faced with addressing what impact, if any, the order will have on the Biden plan.  Who wins, Abbott or Biden?

But what if the employer wants to impose a vaccine mandate pursuant to the impending OSHA ETS, or doesn’t effectively have the choice to require weekly testing, either because of where its employees are or, more likely, due to the administrative challenges of tracking weekly tests or the unavailability of tests or testing vendors?  Will the impending OSHA ETS shield the employer from liability under the order, if it chooses to mandate the vaccine rather than conduct weekly testing? That remains to be seen.

Lockton comment: We also expect the OSHA ETS to be challenged in court. Those rules might be immediately enjoined, at least temporarily, leaving Texas employers not covered by the federal contractor or healthcare provider mandates subject to Gov. Abbott’s executive order.

What about Texas employers (other than federal contractors or healthcare providers receiving federal money) with fewer than 100 employees, and thus not subject to the impending OSHA ETS? We think these employers run a risk of penalties under the executive order to the extent they impose a vaccine mandate on Texas employees and don’t allow employees to avoid the mandate for any subjective reason.

Wellness surcharges and the meaning of “compel”

The order also raises the question of whether any “entity in Texas” that does not outright mandate the COVID-19 vaccine but imposes a medical insurance premium surcharge on the unvaccinated is in violation of the order. The issue is whether a premium surcharge would be viewed as compelling a Texas employee to receive the vaccine over any objection of personal conscience.

The point at which a vaccine-related premium surcharge amounts to “compulsion” is a question that courts may have to decide. But with respect to ERISA employers operating a workplace wellness program under the umbrella of an ERISA medical plan, the employers have a good argument that ERISA preempts the order.

One of ERISA’s signature provisions is a rule preempting the application of state law to ERISA plans, allowing ERISA plans to operate nearly exclusively under uniform federal rules rather than a patchwork of state laws. ERISA provides that it “supersede[s] any and all State laws insofar as they may now or hereafter relate to any employee benefit plan.”

Importantly, it isn’t necessary for the state law to mention ERISA plans expressly, for preemption to apply. Under a 2016 U.S. Supreme Court ruling, it is clear that a state law with even an indirect effect on the administration of an ERISA plan is likely to be preempted, particularly where the state law interferes with the plan’s ability to administer its plan uniformly, without regard to where the plan’s members are located. The Supreme Court wrote: 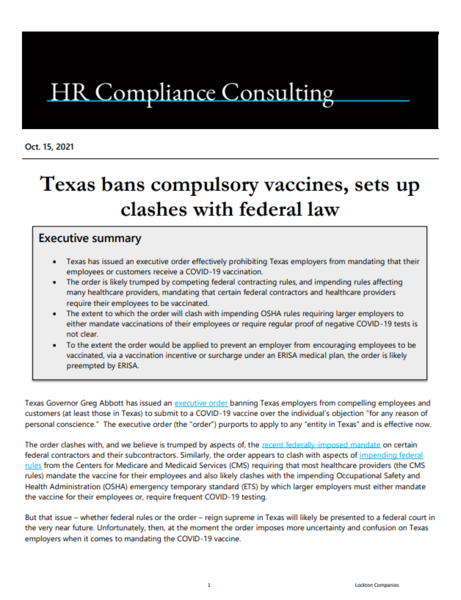 Download alert (opens a new window)Not legal advice: Nothing in this alert should be construed as legal advice. Lockton may not be considered your legal counsel, and communications with Lockton's HR Compliance Consulting group are not privileged under the attorney-client privilege. 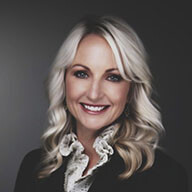