SCOTUS weighs in on abortion rights: What does the Supreme Court opinion mean for employer-sponsored group health plans?

"We therefore hold that the Constitution does not confer a right to abortion. Roe and Casey must be overruled, and the authority to regulate abortion must be returned to the people and their elected representatives."

After today’s holding in Dobbs, states are afforded authority to regulate a woman’s ability to obtain an abortion in their states. The impact of the decision on employee benefit plans is still unclear and likely won't be for the foreseeable future. States and courts will continue to weigh in over the coming months and years ahead.

In the 1973 Roe v. Wade decision, the Supreme Court held that a woman has a right to have an abortion before a fetus becomes viable, based on an implied right to privacy under the Constitution.

Roe was affirmed in a later Supreme Court decision, Planned Parenthood v. Casey, which determined the 14th Amendment’s due process clause protected a woman’s right to an abortion. The issue was brought to the forefront again in Dobbs v. Jackson Women’s Health Organization, a case challenging a Mississippi state law that bans most abortions after 15 weeks of pregnancy.

The Supreme Court decision reversing Roe grants states the ability to pass laws either prohibiting, limiting or protecting a woman’s ability to obtain an abortion in the state. It does not set a standard or timeline for when abortions may or may not occur as was the issue in Dobbs; instead, states will have the full power of deciding if, when, and how their state will handle abortions.

Lockton comment: Currently a number of states have laws on their books banning and criminalizing abortions, which are “triggered” by this recent SCOTUS decision. How this decision impacts the status of those trigger laws will likely depend on state actions. Additionally, in the absence of Roe, at least 16 states have laws that permit abortions and at least 19 states have laws prohibiting and/or limiting abortions.

This means a women’s right to obtain an abortion at any point in the pregnancy, and any penalty that might apply to others (like employers or healthcare providers) who pay for or facilitate obtaining an abortion, will vary state by state. This makes things more complicated for any client operating in multiple states across the U.S.

Employers will want to be aware of the laws of those states in which they operate, offer coverage, and in which their employees reside.

What might this mean for employer-sponsored group health plans?

Although the Dobbs opinion does not directly address employee group health plans, their plan sponsors, and/or their enrollees, there is a high likelihood that certain state abortion laws will impact employer-sponsored health plans.

Lockton comment: Even now that SCOTUS has weighed in, clarity as to the impact on group health plans will not be found for the foreseeable future, and there will still be questions going forward on what employers can and cannot do with risk of liability. Many state laws will be updated, federal taxation issues (e.g., limiting the ability to classify travel expenses under medical) could change, and all the above will continue to be litigated for years to come. We will likely see court battles on this issue going forward. Employers will want to discuss these matters with their legal counsel.

Here is what we know on how Dobbs might impact employee benefits plans, what is still unclear and some potential considerations for employers.

The power of ERISA preemption

ERISA-governed plans are shielded from most state laws that would change the benefits provided by the plan or the way the plan is administered. Thus, ERISA preemption generally allows ERISA plans to operate exclusively under federal law (ERISA) as opposed to having to comply with patchwork state laws.

To the extent a state law would require the plan sponsor to amend its benefits plan to exclude or limit coverage of abortions, ERISA preemption would block that state law’s application to the plan. While ERISA preempts apply to plans, please keep in mind that it likely would not shield others who facilitate women’s procurement of an abortion, such as healthcare providers or employers acting other than through their group health plans.

Lockton comment: How any given state law limiting the right to an abortion might directly or indirectly impact a group health plan (including its employer sponsor or enrollees) will vary based on the specifics of each state law.

Does it matter if the ERISA plan is self-insured or fully insured?

Yes. While ERISA’s preemption shield might prohibit a state from directly dictating to a group health plan whether it can cover abortion, states do have the right to dictate to insurance companies supplying insured coverage whether those companies must (or must not) cover certain procedures. ERISA specifically states that its exemption powers do not extend to any law of any state which regulates insurance. As such, when employer plan sponsors purchase a group insurance policy through a state-licensed carrier (as opposed to offering self-insured coverage), that policy comes with all state-imposed mandates and restrictions.

Self-funded ERISA plans, on the other hand, are not regulated by insurance, and therefore have the protection of ERISA preemption.

What if the plan is not covered by ERISA?

Of course, those plans not covered by ERISA, such as plans maintained by churches or governmental employers, cannot claim ERISA preemption, which means they would likely be subject to state law, including those state laws related to abortion.

Today’s opinion largely leaves abortion regulation to the states, but it doesn’t completely foreclose federal action. Exactly what the federal government can do remains in question, both with respect to what is legally permissible and what is politically feasible.

Earlier this month, President Biden announced that his administration was considering executive action to protect access to abortion. Others have encouraged the administration to increase awareness of and access to contraceptives, including drugs used in medical abortions, under the Affordable Care Act’s preventive care mandate.

It is much more difficult to reverse legislative action, but current indications are Congress does not have the necessary votes to pass legislation that has a significant impact either supporting or opposing access to abortion.

Lockton comment: Numerous legislative proposals were announced immediately after the leaked draft opinion in Dobbs. For example, one bill excluded abortion and related services from the definition of a qualified medical expense. Other proposals attempt to codify Roe or make state access to certain federal funds contingent on states allowing broadly available abortion services. Additional legislative proposals are expected, but the likelihood of those proposals becoming law is low.

The uncertainties of federal authority in the wake of Dobbs and gridlock in Congress emphasize the importance of closely monitoring developments at the state level and in the courts.

At the forefront, it is important for employers to consider the laws of each state in which they operate, in which they offer coverage, and in which employees reside.

Although the impact of the ruling on employer-provided benefits is unclear, here are some options for those employers looking at how a benefits program might be used to assist employees.

Because insurance carriers are required to comply with applicable state laws and regulations, fully insured plans must follow the abortion laws of their applicable states.

For ERISA self-funded plans, ERISA most certainly preempts state laws that “relate to” the ERISA plan. Plan coverage of abortions in states where it is legal is possible.

As a reminder though, plans not covered by ERISA cannot claim ERISA preemption. Non-ERISA governed plans, even if self-insured, could be subject to state laws related to abortion.

If abortions are not allowed in a particular state, an ERISA self-funded plan may possibly cover abortions in states where the procedure is legal. Factors to consider include how such out-of-state services will be billed and whether they are considered out-of-network.

Lockton comment: However, caution is warranted, especially for plans in a state prohibiting abortions but offering coverage for legal abortions in other states. State criminal laws or aiding and abetting of a crime, on the other hand, are likely not preempted by ERISA (unless group health plans are specifically mentioned in those laws). We will continue to monitor these issues.

Employers can reimburse travel expenses incurred by employees and/or spouses and dependents on a pretax basis through an employer-sponsored health plan so long as the expense qualifies as an eligible 213(d) medical expense.

The Tax Code treats certain travel expenses, including transportation and lodging, which are incurred primarily for and essential to obtaining medical care as eligible 213(d) medical expenses. This means they can be paid for by group health plans, including reimbursement through a health flexible spending account (FSA), health reimbursement arrangement (HRA), and/or health savings account (HSA), on a pretax basis. More details on coverage or travel expenses can be found here (opens a new window).

Lockton comment: Employers can choose to cover those travel expenses on a post-tax basis but if the benefit is designed as a program established to pay for travel expenses incurred primarily for and essential to medical care, it could trigger status as an employer-sponsored group health plan subject to laws such as ERISA and COBRA.

Even with such travel benefits, employer plan sponsors will want to evaluate the laws of the state(s) in which it operates, it offers group health plan coverage, and in which its employees reside.

What about coverage of abortion-related expenses through an employee assistance program (EAP)?

An EAP could provide coverage for these benefits, but plan sponsors will want to be careful to ensure they are able to maintain the “excepted benefit” status of the EAP to avoid the application of certain laws, including the ACA, to the benefits program.

Plans sponsors will also need to consider the role of prescription drugs within their group health plans, again depending on applicable state law. How each state will handle emergency contraceptives (e.g., the “morning-after” pill) and abortifacients, as well as telehealth services and mail-order pharmacy relating to such, remains to be seen.

From an employer perspective, further considerations may include offering increased paid time off, leave sharing opportunities, or taxable travel benefits not tied to medical services.

The Supreme Court decision will likely create more questions than answers, especially in the short term. We will likely still see court battles on this issue in the next months, years, and decades, and questions as to what employers can and cannot do without risk of liability will remain.

However, employers must ensure that whatever benefits are (or are not) offered are vetted legally, communicated clearly, and administered in accordance with the employers’ written group health plan documents and/or other policies and procedures, as applicable.

Your Lockton account team will continually stay updated on these issues, and we will work closely with you to ensure the best offerings and solutions for your employees in this ever-evolving legal landscape. 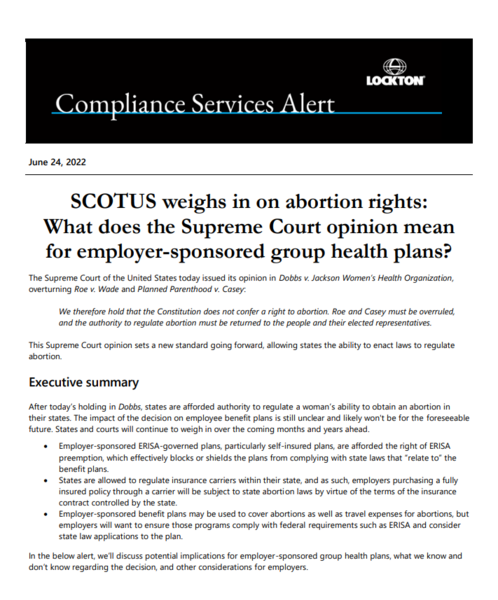