In an extraordinary move in line with these extraordinary times, this week federal authorities directed benefits plans to simply disregard – to pretend it does not exist – a period of at least several months when calculating many common plan-related deadlines, including COBRA-related deadlines. The announcement, while providing significant flexibility and relief to plan enrollees (particularly medical plan enrollees), leaves the plans exposed to adverse selection in significant ways.

The new guidance also temporarily softens the time by which plans must furnish notices, disclosures or other documents to participants and others, and relaxes rules for providing those documents electronically.

The period plans must ignore is called the “outbreak period.” It began March 1, 2020, and ends 60 days after the president’s pandemic-related national emergency declaration ends, or such later date that might be announced in future guidance.

While we expect the president to terminate the emergency declaration late this spring or sometime this summer, the outbreak period to which the guidance applies continues for 60 days beyond the end of the declaration.

The guidance requires plans to operate as though the outbreak period doesn’t exist when determining deadlines for the following events:

Lockton comment: For their part, healthcare plans can take advantage of the guidance when determining their deadline for supplying COBRA election notices but will want to do so only where they are incapable of meeting the deadline, so as to avoid further extending the possibility of adverse selection by COBRA enrollees.

Some examples illustrate the effect of the guidance. Let’s assume the president rescinds the emergency declaration on June 30, 2020. The outbreak period expires 60 days later, on Aug. 29.

Example 1: Joe experiences a loss of medical plan eligibility on April 1 due to a layoff. The plan supplies Joe a COBRA election notice on April 30. Joe would normally have until June 29 to elect COBRA, and another 45 days to make his first payment (Aug. 13).

Joe has until Oct. 28 to elect COBRA (60 days after the outbreak period ends) and until Dec. 12 to make the first payment. Of course, if Joe elects COBRA, he must pay the back premium.

Lockton comment: It appears the plan may pend claims submitted between the loss of eligibility and the date Joe pays for his COBRA coverage. If Joe doesn’t make the payment on time, the plan simply cancels coverage retroactive to April 1. If Joe pays, say, two months of back COBRA premium by Dec. 12, the plan would have to provide the COBRA coverage for April and May, but not beyond that.

Example 2: Same facts, except Joe was laid off on Nov. 10, 2019, received his COBRA election packet on Dec. 1, elected COBRA and timely made his first COBRA payment. His COBRA payments are due on the 1st of each month and considered late (allowing the plan to cancel COBRA) 30 days after the due date. Joe misses his March 1 payment, and the payment is still not made by March 30.

Example 3: Mary is eligible for, but not enrolled in, her employer’s medical plan. She has a baby on March 15, 2020. Mary would normally have 30 days to request special enrollment (to April 14), and coverage would be retroactive to the date of the baby’s birth.

Mary has until 30 days after Aug. 29, or until Sept. 28, to enroll herself and the baby, and if she elects that coverage and pays for it, coverage is retroactive to the date of the baby’s birth.

Example 4: Karen’s health flexible spending account (FSA) requires claims for the 2019 plan year to be submitted not later than three months after the close of the FSA year, or March 31, 2020. Her major medical plan requires claims to be submitted within 365 days after the claim is incurred. Karen incurred medical claims at a local hospital on March 1, 2020, but due in part to the coronavirus pandemic, the claims were not submitted before March 1, 2021. Karen also incurred some health FSA claims in 2019 that she was unable to submit by March 31, 2020.

While no example in the guidance addresses health FSAs specifically, it seems logical that Karen must be allowed to submit her FSA claims until Sept. 29, 2020, creating potential challenges for employers who have already forfeited FSA participants’ unused balances. The hospital’s claims must be considered timely submitted if filed with the plan by Aug. 29, 2021.

Boon for enrollees, bane for plans?

The guidance is well intended and will be well received by plan enrollees. However, plan sponsors, their insurers and reinsurers will certainly have different reactions due to the potential for significant adverse selection against the plans. The extended notice and payment periods under the guidance create long periods within which employees who have triggered special enrollment or COBRA rights can wait to see if they’ve incurred significant claims during the outbreak period, and then elect coverage for long retroactive periods. They must pay for the coverage, of course, and generally in a lump sum (although an example in the guidance reflects a partial back premium payment ensures COBRA coverage at least for the months to which the partial payment is supplied). But the claims exposure to the plans could be significant.

Lockton comment: The federal guidance was prepared by the Department of Labor (DOL) and the IRS. The Department of Health and Human Services (HHS) rides herd over the nation’s health insurers and state and local governmental plans, and while it did not write the guidance, it concurs in it. HHS advised the DOL and IRS that, if necessary, it would “exercise enforcement discretion to adopt a temporary policy of measured enforcement to extend similar timeframes otherwise applicable to non-federal governmental group health plans and health insurance issuers …”

A major concern for self-insured plans is whether stop-loss carriers will cooperate and continue to provide reinsurance for periods when enrollees would not otherwise, but for the recent guidance, have had coverage under the plans. While stop-loss carriers may be beyond the reach of HHS, they are not beyond the reach of state insurance regulators, and HHS “encourages states … to enforce and operate … in a manner consistent with the relief provided” in the federal guidance.

Lockton comment: In other words, reinsurers might do well to play along, although it remains to be seen how aggressively state insurance authorities would compel that cooperation. Accordingly, self-insured plans sponsors will want to raise the issue with their stop-loss carriers to ensure stop-loss coverage for periods of extended coverage triggered by the recent guidance.

As part of the guidance package, the DOL grants relief to plans and their fiduciaries with respect to any other ERISA-required “notice, disclosure or other document” the plan must supply during the outbreak period, as long as the plan and its fiduciaries act in good faith and furnish the material “as soon as administratively practicable under the circumstances.” Good faith, the DOL notes, includes use of electronic media, including email, text and continuous access websites, apparently even if the plan and its fiduciaries are not reasonably able to satisfy existing DOL rules for e-distribution of required materials.

How much must participants know?

ERISA requires that plans inform participants about things like COBRA election deadlines, claim appeal deadlines, and the like. A typical COBRA election notice, for example, will say the COBRA beneficiary has 60 days to elect coverage, and 45 days after that to make the first payment. So, must plans amend their COBRA provisions and COBRA notices to reflect the outbreak period? Must their claims administrators modify explanations of benefits forms, reflecting that any appeal deadline is extended by the outbreak period? Must plans amend their claim filing deadlines, where those deadlines appear in the plan or summary plan description?

That answer isn’t clear, but from a compliance perspective it won’t hurt to provide some sort of notice to participants. Lockton has prepared a model notice to this effect for its clients; the notice it is available from the account service team. It might be worthwhile to have the plan’s COBRA vendor and claims administrator include the notice, or one like it, with COBRA initial and election notice packets, and with explanations of benefits regarding claims that are denied in whole or in part.

Not legal advice: Nothing in this Alert should be construed as legal advice. Lockton may not be considered your legal counsel, and communications with Lockton's Compliance Services are not privileged under the attorney-client privilege. 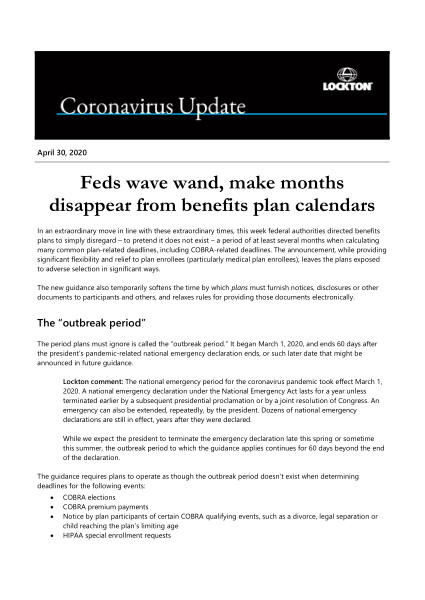