The Office for Civil Rights (OCR), a law enforcement agency within the Department of Health and Human Services (HHS), reminded us, once again, that the Affordable Care Act (ACA) Section 1557 nondiscrimination provisions are in force, and HHS-OCR is actively fielding public complaints to identify instances of healthcare discrimination by certain covered entities based on the patient’s race, color, national origin, age, disability, or sex, including gender and gender identity.

Lockton comment: The ACA’s Section 1557 prohibits discrimination, on the basis of race, color, national origin, sex, age, or disability, within health programs and activities receiving federal financial assistance, such as through Medicare and Medicaid, administered by a federal executive agency, and any entity established under Title I of the ACA, such as the health insurance marketplaces. Interpretive guidance on Section 1557 has been the subject of whip-sawing regulations issued under the Obama and Trump administrations, and the subject of federal litigation with the disputes between them focusing mainly on the extent to which the prohibition on sex discrimination extends to gender identity issues. It remains to be seen how broadly the current administration will apply these rules when it releases new interpretive guidance in its own image.

In a 2020 rebuttal to the Obama administration rules, the Trump administration attempted to make its mark (perhaps in anticipation of the Bostock decision) by issuing amended final rules which narrowed the application of Section 1557 to only health programs receiving federal funding and are principally engaged in the business of providing healthcare. These rules, issued pre-Bostock, allowed discrimination based on gender identity and sex stereotyping and removed coverage protections for transgender individuals. But those Trump administration rules were themselves, then, enjoined by another federal trial court shortly after the Supreme Court handed down the Bostock decision. In 2021, the new Biden administration announced its intent to comply with the Bostock ruling and began enforcing the Section 1557 rules through directed investigations based on public complaints.

Looking at you, Texas

In response to recent state action directed at curtailing LGBTQ+ rights, the HHS warned that, “attempts to restrict, challenge, or falsely characterize this potentially lifesaving care as abuse is dangerous” and runs afoul of federal civil rights and health privacy laws. The warning was directed at a February executive order (opens a new window) from Texas Governor Greg Abbott directing the state’s Department of Family and Protective Services (DFPS) to investigate as child abuse instances where parents of transgender and gender-nonconforming youth seek medically accepted treatments for gender-affirming care.

The Texas governor’s order requires DFPS to treat gender-affirming care, such as puberty blockers, hormones, or other medically necessary treatment, as child abuse despite a significant majority of medical experts unequivocally stating that such care improves the physical and mental health of those for whom it is medically appropriate. This order was enjoined by a Texas district court on March 11, but the state immediately appealed. Under the direction of the state’s attorney general, DFPS continues to recognize and implement the governor’s order despite the ongoing litigation.

Lockton comment: Notably, HHS-OCR warned that the agency also enforces the federal HIPAA privacy and security rules which prohibit healthcare providers and other entities from disclosing protected health information (PHI). Information related to gender-affirming physical or mental health care administered by a licensed provider is PHI and should not be released without meeting a permissible exception under the HIPAA rules, such as an individual’s consent. The HIPAA rules permit, but do not require, covered entities and business associates to disclose PHI without the individual’s consent when it is required by another law. However, HHS-OCR warned that this exception is limited to a “mandate contained in law that compels an entity to make a use or disclosure of PHI and that is enforceable in a court of law.” For plans located in Texas, we think this means that group health plans and business associates should only release PHI if required by law and then only the minimum necessary to comply with the law. If PHI is requested by a state agency or third party, the plan administrator should engage legal counsel for advice before releasing PHI to ensure it is in fact legally required and is minimally necessary to comply.

The Biden administration will be reinterpreting Section 1557 to incorporate the Bostock decision and will try its hand at publishing new guidance that may withstand court challenge. Until new rules are issued, HHS-OCR has resurrected its complaint-driven investigations to resolve discrimination allegations lodged by affected individuals to ensure LGBTQ+ people have access to medically necessary care. HHS-OCR notes that most of the complaints it has analyzed to date involve denials of care or insurance coverage because of a person’s gender identity and were unrelated to gender transition. Some examples of discriminatory practices identified by HHS-OCR include transgender people being denied mammograms, urinary tract infection screenings and medical forensic exams after experiencing a sexual assault.

Lockton comment: As a side note, the short-lived Obama rules under Section 1557 in 2016 also included a notice requirement to issue “significant communications” in 15 languages. However, the 2020 Trump rules eliminated this requirement due to cost burdens. It remains to be seen if the Biden administration will resuscitate this requirement in the next rendition of these rules.

What should plan sponsors be doing while we wait for new guidance?

Until now, some covered plan administrators have largely ignored the Section 1557 rules while waiting for the dust to settle in the courts and for more recent action by federal regulators. Lockton believes now is the time for plan sponsors subject to Section 1557 (e.g., health insurers and healthcare providers that receive federal healthcare funds) to review written plan terms and consider removing explicit plan exclusions for treatments and services based on gender or sex-stereotyping provisions that may operate to bar access to healthcare based on gender.

Lockton comment: We understand, of course, that some faith-based healthcare providers receiving federal healthcare dollars will feel compelled to challenge, on religious freedom grounds, any attempt by regulators to compel them to provide benefits inconsistent with the provider’s religious tenets. These disputes are another matter entirely.

Examples of potentially suspect plan provisions are gender-specific hormone therapy, gender-specific cancer screenings and gender-related surgeries. Most plan sponsors subject to Section 1557 will want to review written plan terms for any gender-specific provisions that may trigger employees to seek assistance from HHS-OCR and discuss the risk of leaving them in place with legal counsel.

Lockton comment: Plan sponsors not subject to Section 1557 should likewise review plan terms for the same sorts of exclusions and limitations. While these sponsors may not be targeted by HHS-OCR, in the wake of the Bostock decision these sponsors could be challenged by employees, dependents and the Equal Employment Opportunity Commission (EEOC) under Title VII of the Civil Rights Act due to plan provisions amounting to discrimination on the basis of sex.

We also recommend plan sponsors review their health plan enrollment systems to determine if those systems are categorically refusing enrollment or benefits based on gender identity or solely on the basis of sex assigned at birth. We have heard anecdotes of benefits administration systems, health insurance carriers and third-party administrators having antiquated enrollment platforms that require enrollees to choose between only one of two options (i.e., either male “M” or female “F” codes). These limited response options may prevent those who identify otherwise from effectively enrolling or having access to certain gender-specific benefits (e.g., only those that enrolled as female have access to certain services such as mammograms regardless of a physician indicating the service is medically necessary for the individual).

If your enrollment systems contain these restrictions and you are open to dealing with such restrictions, we recommend reaching out to the vendor as it may allow the inclusion of additional responses to be added, such as “other,” or “decline to answer,” which would allow any participant, regardless of gender identity, to enroll and seek care based on medical necessity rather than assigned gender. At least, fixing the electronic systems may prevent the manual work of processing gender-nonconforming enrollment requests by hand and at best would eliminate the potential for HHS-OCR or EEOC complaints of denied enrollment. 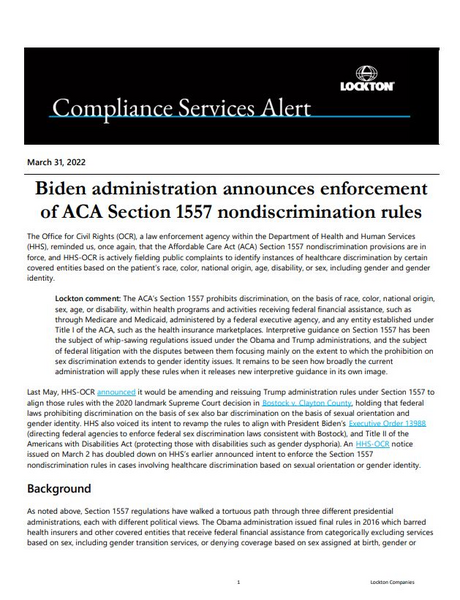 View alert (opens a new window)Not legal advice: Nothing in this alert should be construed as legal advice. Lockton may not be considered your legal counsel, and communications with Lockton's Compliance Services group are not privileged under the attorney-client privilege. 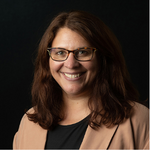