The fanfare that was COP26 has passed. World leaders’ efforts resulted in bold pledges and announcements that have become all too common from this convocation, including the Global Methane Pledge, alongside less ambitious formal negotiations that will succeed only through immediate, robust and ongoing implementation. As this conversation continues, more and more countries are continually putting in place ambitious greenhouse gas emissions reduction targets and are increasingly finding that hydrogen can play a major part in these ambitious plans. While over 30 countries globally have already produced defined hydrogen roadmaps, Australia is among some of the best positioned to produce hydrogen sustainably, at large scale. It is estimated that hydrogen will contribute $11 billion annually to GDP by 2050. (opens a new window) It possesses vast physical resources that can help support a large-scale hydrogen industry, both from a renewable (green hydrogen) or carbon capture and storage (blue hydrogen) perspective. However, as with all large and innovative projects, there are always a magnitude of potential risks that will need to be closely monitored and addressed. In particular, the necessary support required to make these projects commercially ‘bankable’ from a financial and insurability perspective.

Australia is ideally situated to be APAC’s hydrogen export superpower, particularly to countries such as Japan and Korea who are some of the largest consumers of hydrogen in the world. Seizing the opportunity could help deliver economic returns similar or greater to those generated by its current fossil fuel energies (including coal and natural gas) over several decades. Australia could also simultaneously use its vast hydrogen exports to decrease its continuing trade reliance on China, thereby reducing its energy security concerns. Australia is the sunniest country in the world and one of the windiest. Australia’s potential for renewable energy generation is 500 times greater than its current power generation capacity (opens a new window). With this much potential, green hydrogen produced solely from renewable energy is likely to play a vital role in the country’s future climate-friendly energy development plans. As large amounts of any green energy produced cannot be consumed immediately, it will need to be stored and distributed where and when it’s required, typically at peak demand times early in the morning and later at night. Using batteries on large scale is still considered to be prohibitively expensive. Using the energy to generate hydrogen, which can be transported and stored, creates the necessary flexibility required on baseload requirements.

Hydrogen can serve as an energy carrier that emits no greenhouse gases when consumed and can be used to provide energy storage. For example, by converting intermittent renewable energy into hydrogen. This hydrogen can then be used as fuel for power generation, either through a fuel cell or direct combustion in a gas turbine. If Australia can take advantage of this enormous potential for solar and wind energy production, the country has the genuine potential to become the cheapest producer of green hydrogen in the world. This will allow Australia to not only replace a large proportion of its current fossil fuels as a power source in the mining, transport and agricultural sectors, but also to become a global super-exporter of this energy source and be well on the way to meeting its ambitious greenhouse gas emissions reduction targets.

What are the uses of hydrogen?

Hydrogen can power different forms of transport either within fuel cells, or by burning in a combustion engine. It can also be used in the same way as natural gas in power plants to generate electricity. 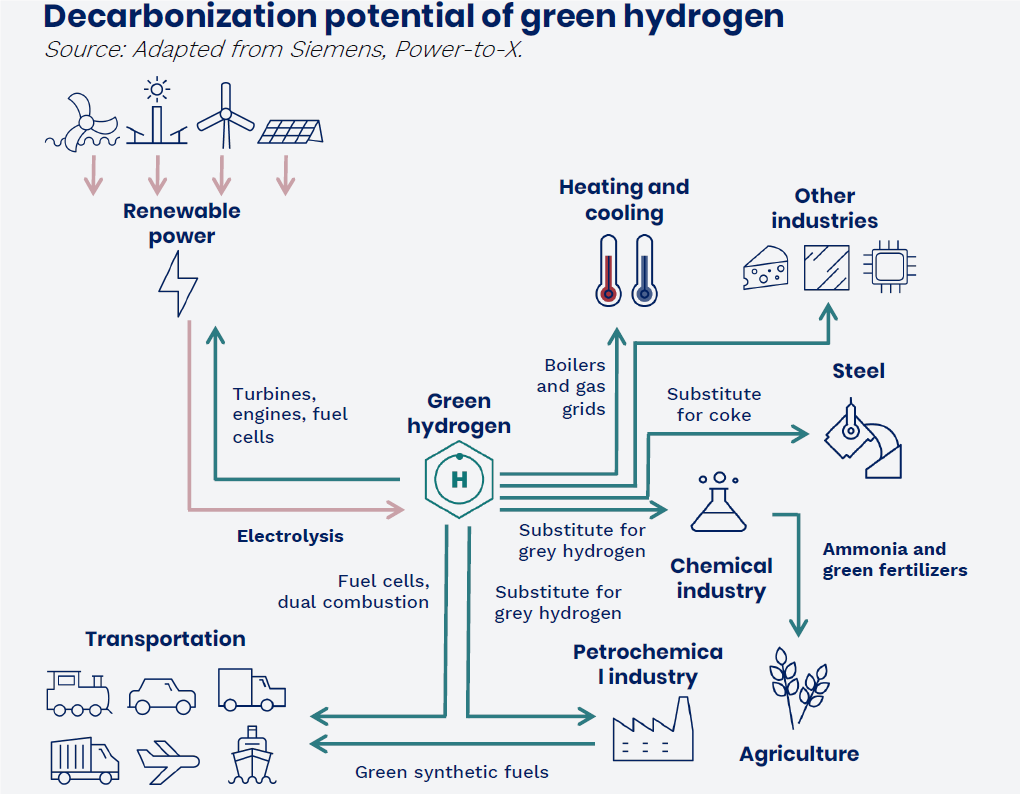 How is hydrogen produced?

Electrolysis of water is emerging as a workable process to produce hydrogen using electric current generated from renewable sources. The energy enables the separation of water into its constituents, hydrogen and oxygen. 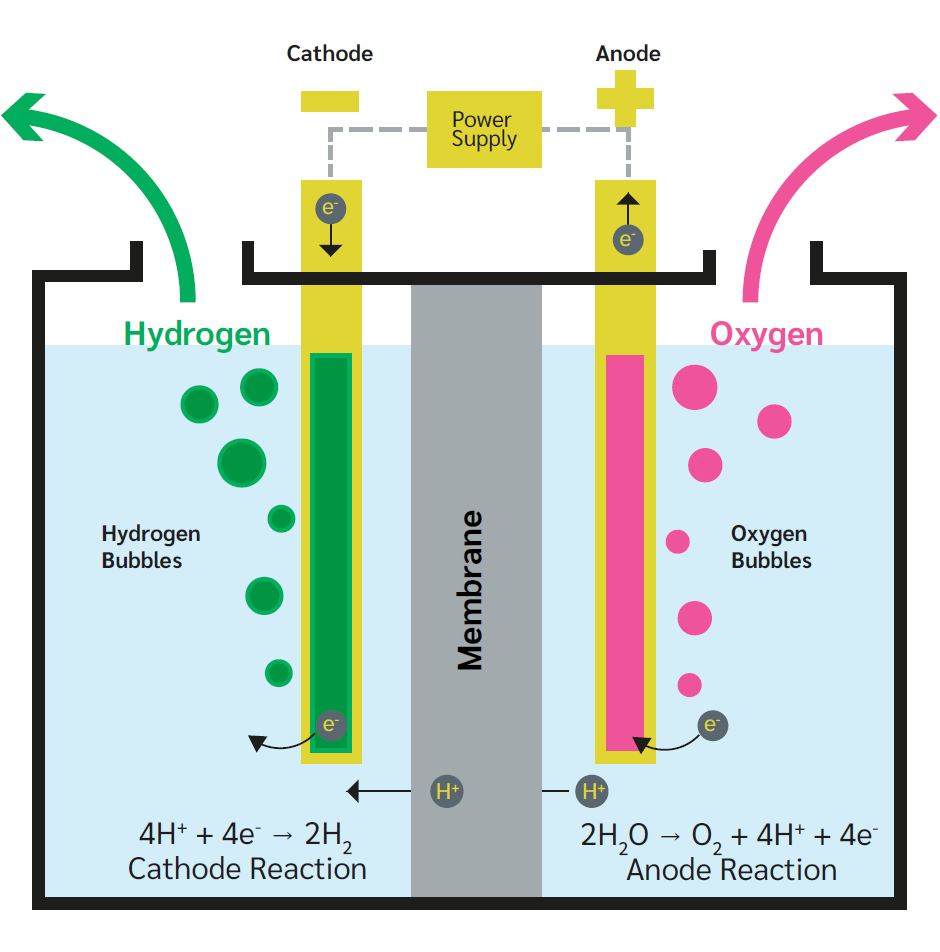 Among the challenges to produce green hydrogen is that the process requires water. Distilled water is unsuitable as it lacks dissolved electrolytes. While seawater would be the preferred option due to its abundancy, the disadvantages of this option include corrosion loss and the need for expensive noble metals as catalysts. At the moment, an alkaline solution (pH greater than 7) is therefore the most economically viable option to perform the electrolysis.

Another challenge is to store and transport hydrogen efficiently and safely. In the form of gas, hydrogen is not very dense and therefore requires more space than as an example in its liquid form. In addition, leaks can lead to vapour cloud explosions. The primary way for storing hydrogen for use in cars, buses and other forms of transport is within pressured fuel tanks. An efficient way of distribution is to use infrastructure already in place such as for natural gas. Alternatively, hydrogen can be transported by ships or barges to meet export demand. Naturally occurring underground caverns that have been drilled into for the natural gas or oil they contain, or man-made caverns (created via a leaching process in rock salt) can also serve as storage.

While the production and handling of hydrogen has been extensively tested in the past in many areas, the type and scale of projects that the hydrogen initiatives entail are unprecedented and therefore come with many concerns. Supply and value chains for the hydrogen strategies are complex and will require precise coordination, particularly as new companies enter the market as planners, developers, manufacturers and operators. There is a definite and steep learning curve for all companies involved in the supply chain, including financiers and insurers who are crucial stakeholders in the viability of such large-scale commercial ventures. Akin to all major energy projects, hydrogen projects will therefore require careful risk analysis and regular information exchanges with insurers and their engineers to achieve the best outcomes for all parties.

Allianz Global Corporate & Specialty (AGCS) has recently identified a number of key areas of concern in a recent risk bulletin (opens a new window). From a technology perspective, operational risks of key concern include some of the following:

An AGCS analysis of more than 470,000 claims across all industry sectors over five years shows that fire and explosions caused considerable damage and resulted in more than €14bn ($16.75bn) of losses over the period under review. Excluding natural disasters, more than half (11) of the 20 largest insurance losses analysed were due to this cause, making it the number one cause of loss for businesses worldwide. Business Interruption (BI) costs following a fire can significantly add to the final loss total. In many cases, the consequential losses resulting from physical damage far exceed the physical damage loss itself, particularly in risk prone industries such as power & energy or oil and gas. For example, AGCS analysis shows that across all industry sectors, the average BI loss from a fire incident is around 45% higher than the average direct property loss.

Secondary explosion protection can ensure the safe design of electrical and other installations in rooms where the formation of a mixture cannot be completely excluded. Ignition sources should be avoided where possible. For example, by using alternatives to electrical components. Proper earthing of all relevant parts and conductive floors should also be considered. Tertiary explosion protection adds another safety layer. It includes designing and constructing buildings and facilities to withstand an explosion with limited damage. Ongoing robust maintenance of the operating facilities and OEM equipment according to the OEMs recommendations is key for ensuring a reduction in risk exposures. This should include a combination of predictive maintenance measures and periodic maintenance procedures such as:

Insurers will need to develop a more detailed underwriting approach to this segment and apply the same rigor in risk selection and underwriting as they do on existing energy construction and operational business. While fire and explosion continue to be key perils, as with any power and energy project risk, business interruption and third party liability exposures are also inherent and need to be factored into overall project risk management. Transit of critical items, subsequent delays and installation issues or mechanical failure exposures are also omnipresent and further considerations should be given to these factors throughout the initial project due diligence phases. Insurance solutions for the emerging large-scale hydrogen production industry are likely to continually evolve, particularly as further advancement to scale and technology are achieved. It is therefore imperative that tailored products are developed to meet the needs of this new energy segment. This will likely result in market leading cross-class solutions being developed that ensure tailored and seamless holistic coverage options are available for insureds in an effort to minimise the inherent risks but also to ensure project finance bankability can be achieved. 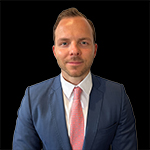