The recent grounding of one of the world’s largest vessels in the Suez Canal has had a devastating impact on maritime trade and supply chains and highlighted the risks involved in the operations of ultra-large vessels.

The containership Ever Given blocked the Suez Canal for a total of six days in March after it was blown off course during its transit along the stretch of water and ran aground.

At 1,312ft (400m) in length and nearly 220,000 gross tons, the 20,000 TEU m/v Ever Given is one of the largest vessels at sea. It is one of an ever-growing world fleet of oversize vessels designed to maximize efficiencies in order to compete on a global scale. The Suez Canal incident highlighted the heightened risk exposure of such ultra large ships.

Ever Given blocked a transportation artery with approximately 19,000 one-way transits per annum. Roughly 12 percent of all global trade passes through this crucial 120-mile (192km) passageway, meaning even the smallest delay can have a significant impact on worldwide markets. Despite the Ever Given having been re-floated relatively quickly, the estimated cost to global trade is around $6-8bn. Whilst it took approximately two weeks to remove the bottleneck of the more than 360 vessels that were delayed by the incident, the knock-on effect on already strained ports, terminals and other logistics providers is evident, with the backlog in the global supply chain as a result of the delay expected to last well into May.

The event has raised several questions over the recoverability of losses sustained by vessel owners, vessel charterers, cargo owners, logistics providers and countless other entities extending well beyond the maritime sector.

With seemingly significant losses yet to be quantified, a key question is how much of these losses are in fact recoverable and from whom. Below is a summary of the insurance position and default legal position regarding the anticipated losses and where they may be recoverable from the perspective of any of the interests described above who have been impacted by this unfortunate event. 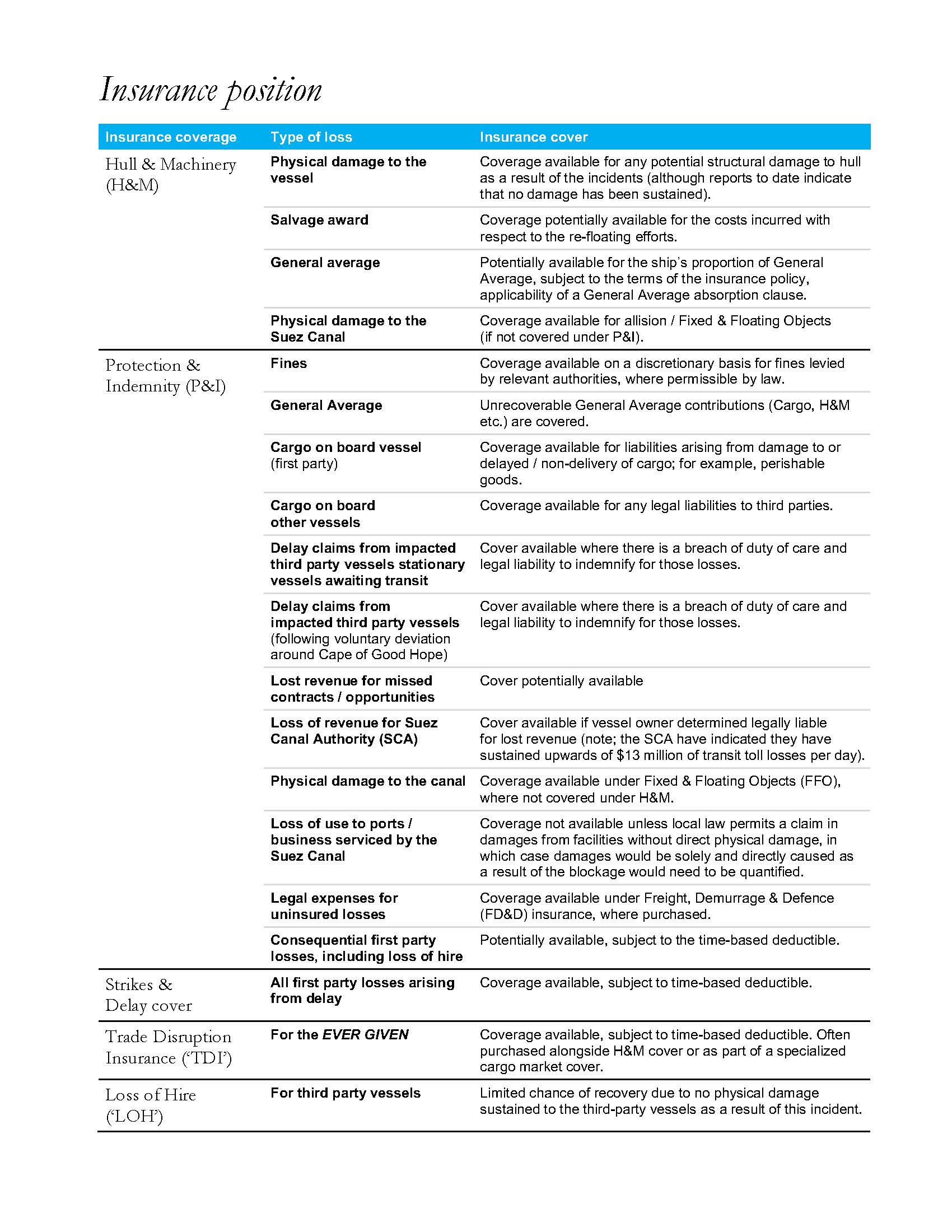 Concerning the salvage operations, the vessel interests have declared "General Average" – a maritime concept dating back hundreds of years that stands for the notion of an equitable sharing among the vessel interests and the cargo interest of certain expenses or losses incurred to avert a peril that threatens the ultimate success of a voyage. Salvage costs are normally included in General Average expenses and the Ever Given General Average is expected to be one of the largest cases in history in terms of the number of parties involved.

Turning to the claims by the Suez Canal Authority (SCA), the Ever Given’s P&I insurance is likely to cover aspects of claims from the SCA for loss of revenue, as well as physical damage to the canal. According to Insurance Insider, the SCA’s claim for physical damage to the canal is believed to be relatively insignificant. On the other hand, It has been widely reported that the canal books revenues of around $15mn per day for ships passing through – which, at six days’ obstruction, would generate a claim of $90mn.

With colourable claims reported as above, on April 13, the SCA filed a claim (opens a new window) for $916mn against the Ever Given and her Japanese owner, Shoe Kisen. They also sought and were granted an arrest of the vessel by an Egyptian judge. The SCA claim reportedly includes $300m for salvage and $300m for “loss of reputation”, which appears set to be rejected by the vessel’s insurer, the UK P&I Club, which had already made a compensation offer to the SCA and reportedly found the SCA’s decision to arrest the vessel “disappointing”. For its part, Evergreen, the vessel operator, in a press release said that the SCA’s claims are largely unsupported.

The SCA has reportedly said that it intends to maintain the vessel’s arrest until the claim is paid, causing anger among the shipping community. The vessel’s interests are not seeking the transhipment of the cargo on board, on the basis that only the vessel is arrested and not the cargo.

Further, the UK P&I Club is expected to cover claims up to USD 10mn, before the International Group’s (IG) pooling and reinsurance arrangements are triggered, which provides up to USD 2bn of reinsurance cover in a contract widely placed in the Lloyd’s market, according to Insurance Insider. The loss hits and insurance line that has faced unprecedented large claims in recent years, resulting in the first hardening P&I market in over a decade, with P&I Clubs seeking general increases between 5-10% during the 2021 renewal. At the same time, both hull and cargo risks continue to face double-digit rate rises after more than two years of hardening.

Vessels continue to increase in size and complexity to accommodate the rapidly growing demand for goods from all corners of the globe. Meanwhile, the infrastructure which they rely upon so heavily to facilitate the movement of cargoes has become increasingly valuable to global trade, making it more vulnerable to disruption.

Moreover, the facilities enabling the movement of goods around the world (e.g. Panama Canal, Port of Shanghai, Mississippi River, etc.), are under ever-increasing strain as a result of various other factors such as inadequate maintenance, political instability, and climate change to name a few.

While a more catastrophic long-term disruption to the global supply chain was fortunately averted in the case of the Ever Given, this should be seen as an alert to encourage proper risk management and planning for future events which may not be so quickly resolved. Vessel owners and operators must thoroughly evaluate their exposures in order to ensure they are adequately insured against unforeseen future calamities. 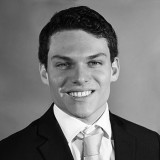