The IRS, with concurrence from the Departments of Labor and Health and Human Services, recently published Notice 2021-58 (opens a new window), which clarifies certain COBRA aspects of both last year’s outbreak period guidance and this year’s COBRA subsidy program under the American Rescue Plan Act (ARPA). Among other items, the IRS has imposed some reasonable boundaries on the time a COBRA qualified beneficiary has to elect and pay for COBRA under the outbreak period guidance.

In late April last year (and again in February this year), the Department of Labor, due to the pandemic outbreak, issued guidance under ERISA that paused the running of certain time periods in which a plan enrollee had to do something. The pause (which would last for 12 months or, if sooner, the 60th day following the rescission of the presidential national health emergency) provides the enrollee additional time to take action with respect to claims and appeals, HIPAA special enrollments, and the following COBRA actions:

The outbreak period guidance was originally unclear about how all the disregarded time frames run and whether each action – such as each monthly COBRA payment – is a separate deadline that is extended for up to 12 months. If so, theoretically the extensions could go on for years.

Fortunately, the recent guidance clarifies that was not the intent.

With respect to COBRA premium payment deadlines, how the new guidance plays out depends on when the COBRA coverage election is made.

If an individual elected COBRA continuation coverage outside of the typical initial 60-day COBRA election time frame (a deferred election that is permissible under the outbreak period guidance), that individual generally will have one year and 105 days after the date the COBRA notice was provided to make the initial COBRA premium payment (the general 60-day election period plus a 45-day period to make the first COBRA premium payment, plus the up-to-one-year pause to these periods). Thus, regulators say the plan does not have to allow 45 days to make the initial premium from the time the COBRA enrollee actually makes the COBRA coverage election (unlike the way it works generally in the absence of the extension).

On the other hand, if an individual elected COBRA continuation coverage within the typical initial 60-day COBRA election timeframe, that individual will have one year and 45 days after the date of the COBRA election to make the initial COBRA premium payment.

Each subsequent premium payment is due within one year from the original due date plus the normal 30-day grace period, not – as some had surmised – one year after the due date of the immediately preceding premium payment (an interpretation that theoretically could have strung the stream of COBRA premium payments out for many years).

Lockton comment: We wish plans and their COBRA administrators good luck in attempting to administer these initial premium payment due dates under the new guidance. At a minimum, it would seem to be a best practice for COBRA administrators to notify any COBRA qualified beneficiaries, who will be affected by these new rules regarding premium payment deadlines, of those deadlines.

Interaction with ARPA and premium subsidies

To make sure employers stay confused, Congress passed a provision in ARPA that provides for a second bite at COBRA (opens a new window) for certain COBRA qualified beneficiaries (assuming the individual was still within the potential federal COBRA or state mini-COBRA coverage periods), plus a 100% COBRA premium subsidy for payments due, generally speaking, for the period between April 1, 2021, and Sept. 30, 2021.

However, the time to make various elections under the ARPA subsidy rules was not deferred or suspended pursuant to the outbreak period guidance.

Yes, we have examples

The guidance offered some examples which do help to illustrate how the agencies view the way the rules should work. These examples assume the outbreak period has not ended.

Rory had a qualifying event on Aug. 1, 2020 and received a timely COBRA notice from the employer plan. Rory elected COBRA on Feb. 1, 2021 – after what would have been her typical 60-day election window – retroactive to Aug. 1, 2020. Rory will be required to make her initial COBRA payment no later than Nov. 14, 2021 (one year plus 105 days after Aug. 1, 2020). That payment would need to include the monthly premium payments for August through October 2020. The November 2020 payment would be due no later than Dec. 1, 2021 (one year plus 30 days after Nov. 1, 2020) with subsequent payments for each month of coverage due monthly thereafter.

If Rory fails to make any subsequent premium payments within the outbreak period guidance relief (one year plus 30 days from the original due date), the plan will not be obligated to pay for otherwise covered services that were provided in the months for which the COBRA premiums were not timely paid.

What if Rory’s qualifying event had occurred earlier, and the plan provided her COBRA election notice on April 1, 2020, and she elected COBRA after her typical 60-day COBRA election window but within one year and 60 days after the plan provided the election notice (for example, by Oct. 1, 2020)? Under the new guidance, her initial premium would have been due before Nov. 1, 2021 (in this case July 14, 2021, one year plus 105 days after the plan’s provision of the COBRA notice). But the new guidelines make it clear that her initial premium payment is not due until Nov. 1, 2021, because Nov. 1, 2021, is within one year plus 45 days after her COBRA election.

Scott had a qualifying event and the plan sent his election notice on Oct. 1, 2020. He elects COBRA on Oct. 15, 2020, with coverage retroactive to Oct. 1. Scott timely elected COBRA (even without the outbreak period guidance) but does not make his initial COBRA premium payment by the typical deadline of 45 days after his COBRA election. He has until Nov. 29, 2021, (one year and 45 days after his COBRA election) to make his initial COBRA premium payment. The payment for November 2020 (and all subsequent monthly payments) is due one year plus 30 days after the premium would have otherwise been due (e.g., Dec. 1, 2021, for the premium due for the month of November 2020).

Because the ARPA subsidy rules provided a second opportunity to obtain COBRA coverage (but not necessarily retroactively to the original COBRA qualifying event), they caused some additional complexity and ironic results. The subsidy, like the outbreak period guidance, did not extend the maximum COBRA coverage period, and all the other rules described above still apply unless the individual made a timely COBRA election under the subsidy rules to grab a slice of the ARPA subsidies.

1. Retroactive COBRA continuation coverage under the outbreak period guidance, for a potential subsidy-eligible individual under ARPA

Suzanne had an involuntary termination of employment on March 1, 2021 (and the plan sent her COBRA election notice the same day). She was subsidy-eligible under ARPA, and therefore received the notice regarding the ARPA extended COBRA election period on May 31, 2021. She elected COBRA continuation coverage with ARPA COBRA subsidies beginning April 1, 2021 but chose to not elect COBRA continuation coverage retroactive to March 1, 2021.

Lockton comment: Yes, it seems ironic that by taking the ARPA subsidy and not electing retroactive COBRA for periods prior to April 2021 she lost the right to do that later. In an additional twist, however, she can continue her COBRA coverage after the ARPA subsidies expired, until the end of the original 18-month COBRA period which started March 1, 2021.

2. Payment for retroactive COBRA continuation coverage under the outbreak period guidance by a subsidy-eligible individual under ARPA

Ethan had an involuntary termination of employment on Nov. 1, 2020, and the plan provided the COBRA election notice on the same date. He did not elect COBRA coverage, deferring that election pursuant to the outbreak period guidance. On April 30, 2021, however, he received the notice of the ARPA extended election period and on May 31, 2021, he elected subsidized ARPA coverage beginning April 1, 2021, and – unlike Suzanne – retroactive COBRA coverage back to the date of his qualifying event, to wit, Nov. 1, 2020.

Lockton comment: Note that Ethan would have to start making payments again for coverage periods after September 2021 if he wanted to have the COBRA coverage continue after September, but the payments would not be due until one year and 30 days after their respective due dates (e.g., by Oct. 31, 2022, for the October 2021 coverage period). Yes, this second bite of the apple adds additional selection risk to the plan as Ethan would not have to make the payments until after he knew whether he had incurred any expenses for those months.

The outbreak period rules, when issued in April 2020, were promulgated quickly and in an ad hoc manner and thus are very confusing and, in many ways, counterintuitive. The recent guidance provided some needed clarity, around COBRA premium payment deadlines. Nevertheless, since they are so different than the traditional rules, we wonder how many COBRA administrators will be able to administer these deferred premium payment deadlines accurately, particularly where there is interplay between the outbreak period guidance and the ARPA subsidies. It will take a very sophisticated, as well as unlucky (i.e., high-cost claimant), individual to understand the opportunity to select against the healthcare plan. While under the new guidance it seems unlikely that anyone can plan to use these complex rules to their advantage, the anti-selection risk to the plans is real. 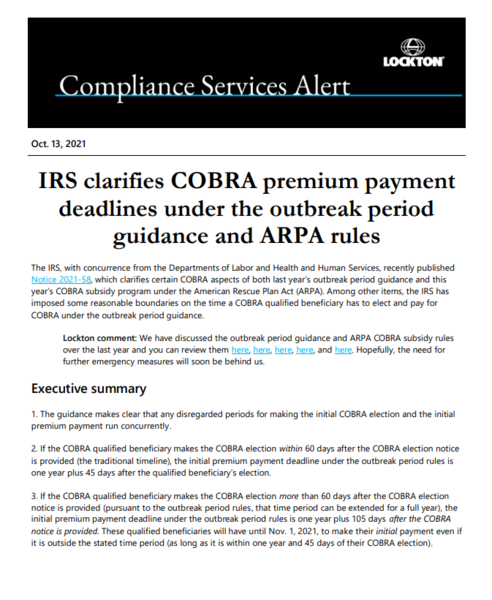 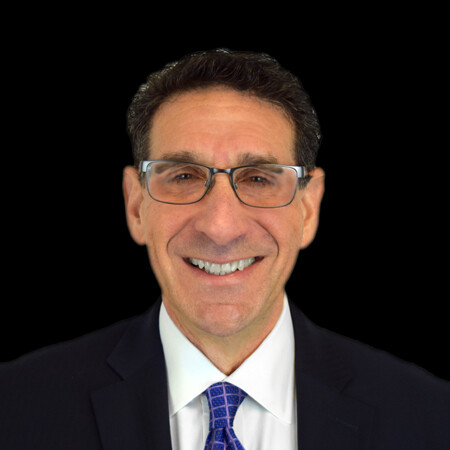