What is digital or “crypto” currency?

Digital currencies use electronic tokens, similar to arcade tokens or casino chips, that can act as payment for a good or service. The tokens are managed by a peer-to-peer network of computers operating free, open-source software. No government or central authority issues, oversees or backs the value of the tokens. They must typically be exchanged for a traditional currency (dollars, euros, yen, etc.) to access the good or service.

Digital currency uses an innovation called blockchain technology which acts like a bank’s balance sheet, tracking transactions made with the currency. The technology, allows capabilities traditional currency cannot, including:

There are more than 10,000 different types of digital currencies, each with different technological attributes that secure them or allow them to transfer value. Bitcoin and Ethereum are the largest as measured by market capitalization. Trading in digital currencies is akin to trading dollars for euros, yen or any other recognized currency.

Digital currency, also called “cryptocurrency,” has garnered headlines recently due to its wild swings in value and the excitement associated with the new technological innovations it represents. Both individual and institutional investors have taken note. From a fiduciary perspective, however, this volatility is exactly what makes digital currency’s inclusion in a corporate retirement plan inappropriate.

When tech stocks first emerged during the infancy of the internet age in the 1990s, investors knew technology firms would play a larger and larger role in society for years to come. It was a question of which companies would thrive and which would fail. The resulting speculative fervor that gripped technology stocks during the new millennium created wealth for some but led to dramatic losses and permanently impaired portfolios for others, especially those investors who overallocated assets.

In the current environment of daily headlines and head-snapping price movements, the risk that participants could misallocate too large a percentage of their total assets to digital currencies is elevated. In the future, though, when digital currencies become more established, their inclusion as an alternative investment, such as gold or real estate, within a retirement plan may be validated. But currently, the attention-grabbing performance of digital currency comes more from speculation than sound investing principles. As seen when the tech bubble burst in the 1990s, speculation and excitement associated with new innovations often prove poisonous for investment returns and should be looked at with caution by prudent plan fiduciaries.

While there is currently no guidance on fiduciary-based obligations related to digital currency specifically, there is a long history of guidance related to alternative assets in general. Presumably, similar considerations apply to digital currency including security risks, record-keeping and custody concerns, liquidity and diversification, transaction risk, government regulation and valuation.

While nothing within ERISA would likely prohibit the use of digital currency in a retirement plan, doing so would trigger these additional obligations for plan fiduciaries. The regulators would be particularly concerned with:

Both the potential risks and possibilities inherent in the technology behind Bitcoin, Etherium and the thousands of other digital currencies may one day transform financial markets. In the current environment, however, the investment performance of these cryptocurrencies is driven more by speculation about that potential rather than actual creation of value. As this market matures, it will likely offer an attractive diversification option to a portfolio built from traditional stocks and bonds. Until it does, however, fiduciaries are best served to avoid these options in retirement plan lineups. If you have more questions about digital currencies, please contact your Lockton Retirement service team. 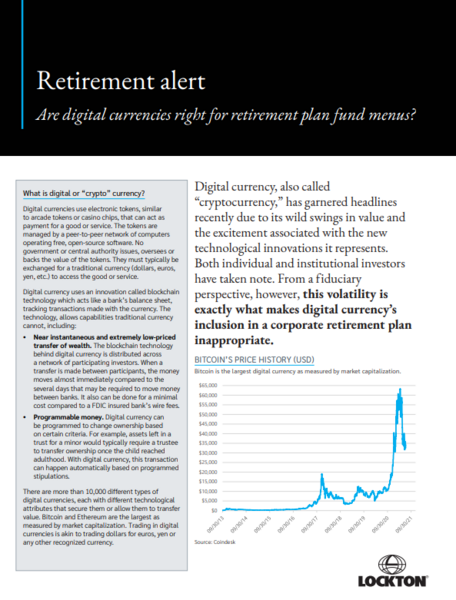 Download alert (opens a new window) FOR INSTITUTIONAL USE ONLY Investment advisory services offered through Lockton Investment Advisors, LLC, a SEC registered investment advisor. Nothing in this message should be construed as legal advice. Lockton may not be considered your legal counsel and communications with Lockton’s compliance services group are not privileged under the attorney-client privilege.