The burning cost of wildfire risk

Wildfires have dramatically increased in both frequency and severity. This is no longer an issue affecting a small number of geographies, but now a global challenge with catastrophic consequences to both life and property.

Some sectors of the economy are particularly affected by expanding liability risks and an action plan is needed to prevent insurance costs from spiralling out of control.

Experts attribute the shift in the wildfire risk to two interacting factors: Climate change and a shift in land use. When combined, these factors can create ideal conditions for rapidly spreading and intense fires that are difficult to extinguish.

The fact that these large wildfires develop in populous regions makes them particularly dangerous. They do not only impact people’s health but also ecosystems and local economies. 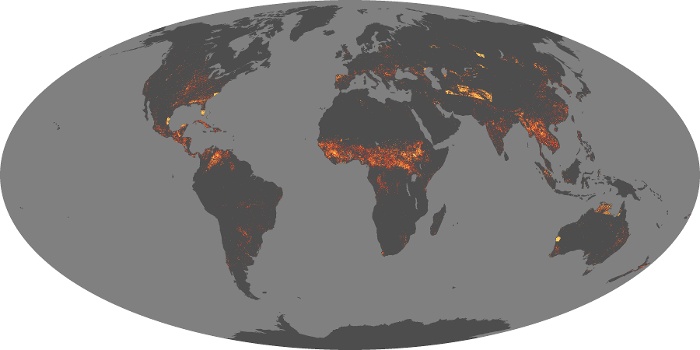 Australia has a long history of bushfire losses but costs have been rising in the past decades. Electricity infrastructure assets, government bodies and vegetation management operations are particularly affected and are driving claims frequency activity.

Among the most notable and costly events is the 2019 Cudlee Creek class action that some believe to exceed AUS$200m in potential liabilities. 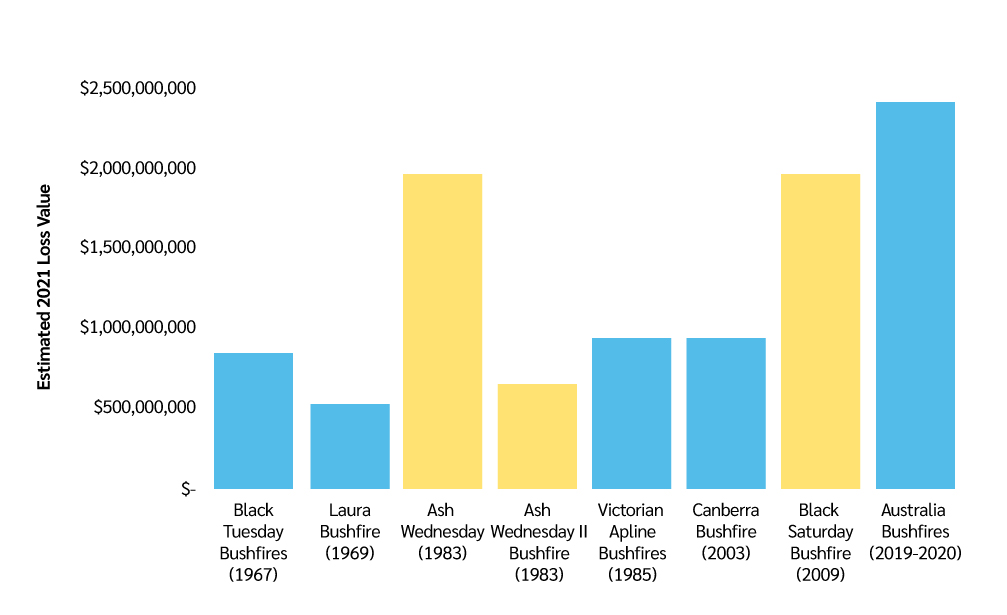 North America is also experiencing a similar increase in losses. The 20-year snapshot on excess liability loss trends below excludes the four largest wildfire claims in California and incurred but not reported losses, but still shows a gradual increase over the past decades.

Bushfires are not confined to the global hotspots but are becoming a worldwide issue as the following table illustrates:

10 countries most affected, in terms of economic damage, by wildfire disasters for the period 1900 to 2013 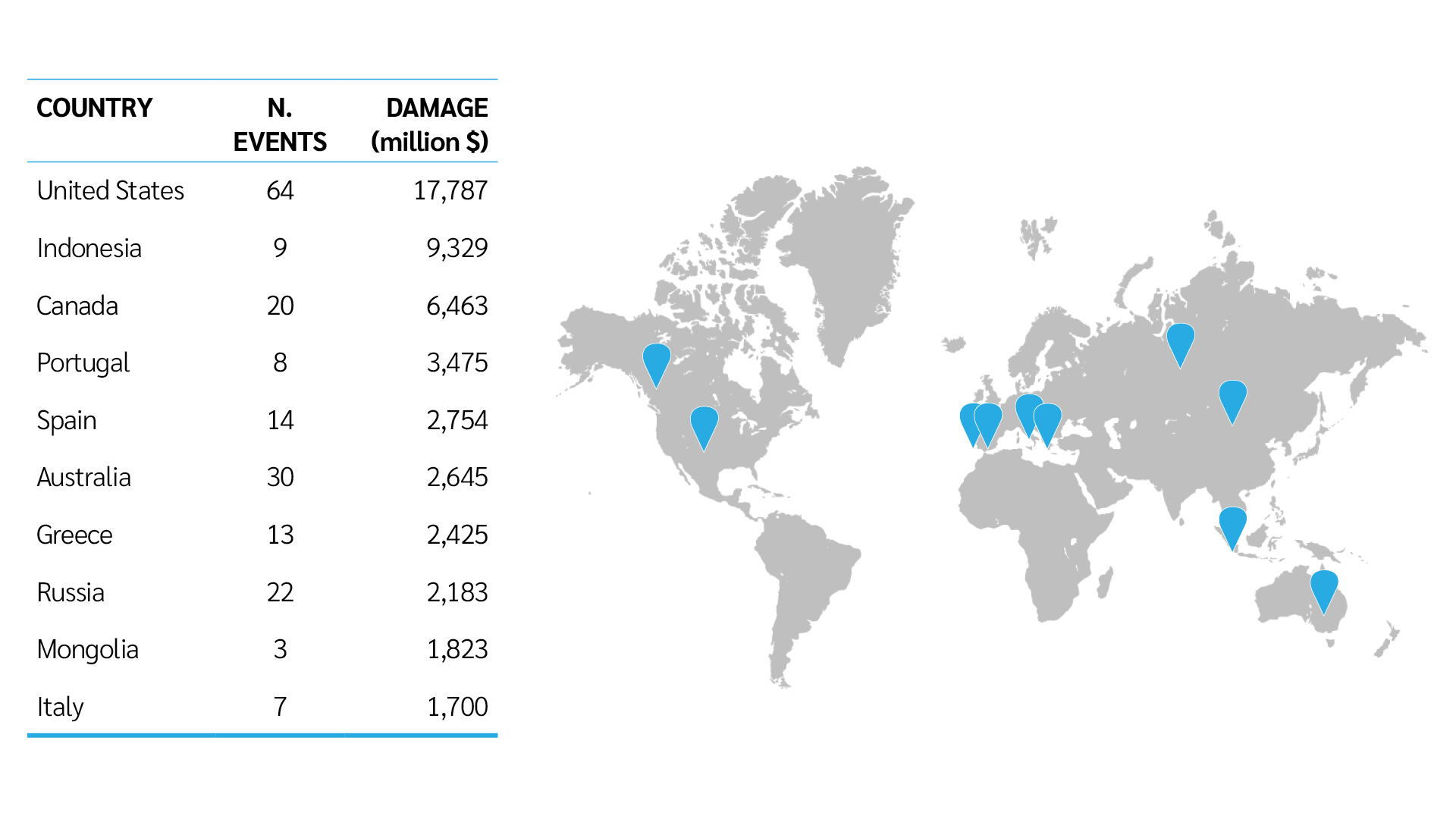 With the expansion of populations and people living in areas of greater risk, the potential for larger liability losses increases. While insurance buyers from Australia and California expect questions from liability underwriters around bushfire exposure at renewals, insurance buyers in emerging risk areas are less likely to be prepared for them. In case of the latter, it is key to look at how countries/ regions with a history of bushfires mitigate their risk exposure and how these strategies could potentially be applied in regions that are becoming more exposed such as Europe, Canada and Latin America. With a growing exposure and larger awards being granted, bushfire protection must be a joint effort between governments, businesses and individuals.

Australia has some of the most advanced bushfire management procedures in the world. The local governments are heavily engaged, and the existing legislation could be suitable for other regions where bushfire risk is becoming more prevalent. Black Saturday 2009 wildfires (opens a new window) and the ensuing Royal Commission was a pivotal moment for the Australian bushfire landscape as it triggered many significant changes to bushfire prevention, such as:

These types of controls are crucial for businesses in emerging risk territories to understand their potential risk exposure and how it can be mitigated. This exercise can also help preparing for insurance renewals as these are also the areas that underwriters take into consideration when assessing the risk.

The following trades are seen as high risk by underwriters from a bushfire liability perspective:

Many Insureds continue to improve the way risks are presented by combining qualitative risk information with empirical data including both individual risk profiles and industry wide information.

For example, in the electricity industry, technology such as Rapid Earth Fault Current Limiter (opens a new window), which limits the amount of energy released when an earth fault (a connection is made between a powerline and the ground) occurs on a powerline, is highly effective in combating electricity network fire starts. There are many more technologies entering the market which have the propensity to either mitigate risk and/or identify risk.

The key from an insurance perspective is being able to objectively demonstrate the effectiveness in fire start mitigation over time to underwriters. This improvement in technology can also be applied in other trades such as vegetation management and contractors. Insurers often ask contractors to obtain a substantial limit of liability, which can be very expensive, and contractors need to provide full explanation of implemented measures and explain their advantages to underwriters. This is a precondition to get a reasonable premium quote. In the past years many businesses have struggled with the large increase in premiums, which has stripped away profitability.

Contractors can take advantage of technology such as drones to monitor and obtain data to improve risk management. A high performing vegetation management contractor that uses drone technology to collect data can benefit from historical last cut span data to form the starting point of a cycle. Initial cycle times are refined through temporal analysis of reliability data. Both the frequency and severity of bushfires are recorded. Wildfire, storm, and sensitive area data are used to further adjust timing, ensuring that impacted spans are treated prior to high-risk periods.

Circuits are sequenced across the agreed cycle times. The analysis can result in targeted tree removal programmes leading to attractive return on investment that can also reduce hazard tree risk and/ or operating expenses.

All this is logged digitally and enables the client to not only bid for more work and become a trusted contractor but also to obtain a significant reduction in insurance premium, whilst maintaining the liability limits. All industries with bushfire exposure will need to collect data to monitor their risk and disclose the implemented risk mitigation measures to underwriters to ensure that they obtain coverage at reasonable cost.

Capacity of Insurers materially reduced from 2019-2020 where there was a real change in the liability market and bushfire liability was a leading force in that. This led to a worldwide capacity reduction and the limits available to clients also shrank or became more expensive.

Therefore, there is finite insurance capital/capacity available to underwrite bushfire liability risk. That dynamic plays out as insurance buyers needing to proactively promote the quality of their risk to attract finite insurance support that can be selective.

Insureds are required to demonstrate to underwriters that they are actively and successfully managing their risks. There must also be a balance around the cost of traditional capacity and the use of alternative risk transfer (ART) solutions, ranging from more active use of self-insured vehicles such as offshore captives to long-term structured deals. Multi-year bushfire ‘stretch aggregate’ continues to be utilised in the Australian marketplace which offers certainty of cover and pricing over a number of years. However, the select few insurers who support this solution have significantly increased their rates to the point where this option is commercially less attractive.

The increase in global temperatures and, for some regions, greater drought frequency and severity, predicted under future climate change scenarios, could lead to substantial increases in fire probability and area burned in the coming decades. A recent global analysis suggests that the greatest surges can be expected for the western US, south-west Canada, parts of the Mediterranean basin, eastern Siberia, south-central Australia, western South America, and much of the drier regions in Asia. However, there may be surprises due to our limited understanding of the complex interactions between weather and climate, vegetation response and human activity.

Nearly all of the costliest wildfires (total and insured economic losses) have occurred in the regions listed above (most notably the US) and therefore the expected increases in fire activity in the future can be expected to have some implications for the insurance industry, namely in the form of increased losses.

While extensive and severe wildfires cannot be prevented, effective risk mitigation strategies exist that have the potential to lead to significant reduction in human and economic losses from wildfire. Much of these require action at the community and homeowner level. Also, the implementation of zoning, i.e., regulating building in areas with high wildfire risk, could represent a major step forward in wildfire risk mitigation. These are areas where the insurance industry could play a key role through working together with legislators, communities, and individuals. 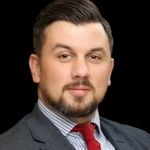