Heavy rainfall has caused floods that affected nearly 70 million Chinese citizens across 28 provinces this summer. While costs are likely to exceed $29 billion, according to estimates, only a fraction of the sum will be insured.

Severe monsoon rain that started in July first flooded the Central Eastern provinces of China. Later on in August, a fresh round of floods hit the Szechuan province, towards the western part of China. The August flood event has also put the 2003 completed Three Gorges dam to test as the flow was close to the maximum capacity.

The precipitation in the Yangtze river basin was 54% heavier than average during the period. The Yangtze River Economic Belt is home to more than (opens a new window) 40 percent of China’s population (about 600 million people) and accounts for almost 50 percent of export value and 45 percent of gross domestic product, according to non-profit initiative China Water Risk.

The inundations have resulted in direct economic losses worth around 200 billion yuan (USD 29 billion), according to a Chinese official (opens a new window) at a media conference. Of the nearly 70 million people that have been affected, 4.7 million had to be evacuated.

The latest summer floods are described as the worst to affect China since 1998, when 223 million people (opens a new window) were affected, 3,004 people died and 15 million were made homeless.

After the 1998 event, the Chinese government has increased its efforts in flood management, improving flood forecast and active defense. Flood waters have, for example, been directed away from urban areas. This has helped reduce casualties in the latest flood event but has in turn caused inundation to agricultural land. Since June, 2020, 433 rivers have surpassed warning levels (opens a new window) and 33 rivers have reached record highs in China.

Insurers in Hubei, Hunan, Guangxi, Jiangxi, Sichuan and Anhui have reportedly received (opens a new window) 188,000 claims totalling CNY5.28bn ($759m) in the month of July. While more claims are likely to have been filed since, the increase is set to be limited. Although on the rise, flood insurance penetration remains relatively low in China. In 2019, non-life insurance premium rose 11.8% YOY to represent around 2.2% of China’s gross domestic product (GDP), according to Swiss Re (opens a new window). This compares to around 8.5% in the US and Canada, for example.

The size of the existing protection gap in China becomes clear every time there is a large flood event. In 2016, for example, floods in the Yangtze River region resulted in losses amounting to USD $23 billion, less than 2% of which were insured (Swiss Re). 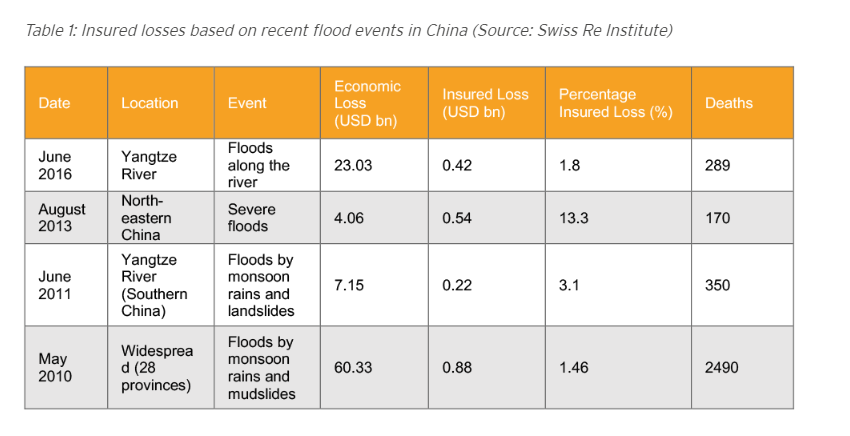 The right approach for China is still in the making. The low level of NatCat compensation in China requires greater cooperation between government agencies, legislative departments, commercial insurance companies and financial institutions. In addition to establishing an effective multiparty NatCat coping mechanism and compensation system, it is also important to enhance the role of commercial insurance.

Based on a recent study from Gen Re (opens a new window), floods make up 24% of economic losses caused by natural catastrophy events in China. To increase insurance penetration it’s necessary to address the accumulation risk through reinsurance protection.

Flood risk is on the rise

Addressing these limitations should be a matter of urgency since climate change models predict an increase in frequency and intensity of extreme weather events in China. Over the past 60 years, the number of days with heavy rain increased by nearly 4% every decade - according to Meteorologist Song Lianchun from China’s National Climate Centre. Development and human activity further worsens the situation. Decades of land reclamation and dam building have lowered the area and volume of lakes and rivers, reducing the amount of water they can store before they burst their banks. While the central government and local authorities are increasingly trying to boost the awareness of flood risks, the most recent event will no doubt serve as a reminder that China remains very vulnerable to natural catastrophes. 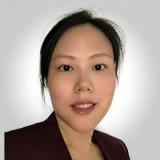